The term “coral reef plants” has been traditionally used to refer to all photosynthetic life forms (other than bacteria) commonly found within coral reef ecosystems.

Such organisms have been also been traditionally divided into two major “plant” sub-divisions: “flowering plants” (angiosperms) and “algae“.

However, as today’s high school and college students are well aware, the diverse array of life forms that represent the “algae” are no longer considered “plants” (part of the Kingdom Plantae) by modern biologists (more on that later).

To keep with the long-established tradition of discussing these two divergent groups of autotrophs together while still recognizing their profoundly distinct differences, these two groups are both included in our page on “coral reef plants” but assigned to separate sections below.

Seagrasses are most often found in shallow, sheltered marine or estuarine waters. They are the only type of true plant to successfully colonize the sub-tidal sea.

The distribution of seagrasses within coral reef systems is restricted to the protected waters of the lagoon (back reef). Here, these plants often form dense and extensive seagrass meadows – a distinctive habitat-type within coral reef ecosystems.

Seagrass meadows play key roles in the lives of many coral reef animals including fishes, invertebrate animals, and visiting marine reptiles and mammals. They are used as feeding and nursery areas, and/or breeding grounds for lagoon residents and visitors.

Some of the largest marine vertebrates – including certain fishes, sea turtles, manatees, and dugongs feed directly on seagrass blades.

This habitat also provides food and shelter for some of the most highly valued (commercially) species of invertebrates, including most notably conch and spiny lobster.

Compared to coral reefs, seagrass habitats have little physical complexity. For larger animals, there is scarce shelter here above the grass blades – save for occasional isolated sponges, octocorals, coral colonies, and patch reefs. 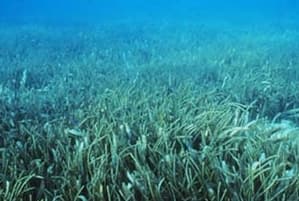 Thus, the animals active here by day are mainly small invertebrates. These seagrass dwellers rely heavily on concealment during daylight hours, either through camouflage or burrowing.

A few, like the once-ubiquitous conch, have stout shells to protect them. Only such well-defended animals and can roam about in the open by day with a measure of safety. At night however, many of the larger reef fishes that shelter by day on nearby patch reefs or in the outer reef zones move into the seagrass meadows to forage under the cover of darkness. Sponges provide refuge for small fishes in a seagrass meadow.

Mangroves are a unique group of large shrub-like plants that grow in thick, physically complex “forests” that line many tropical and sub-tropical shores.

One of the rare terrestrial plants able to tolerate direct immersion in sea water, mangroves have adapted to saline conditions where other “land plants” cannot survive. They accomplish this feat by means of specialized salt-filtering roots and salt-excreting leaves.

Mangroves have the capacity to considerably enhance the abundance and diversity of reef fishes and other types of marine life throughout the coral reef ecosystem.

The complex prop root system serves as a nursery habitat that increases the survival rates of young reef fishes, as well as a substrate to which all manner of algae, sponges, and other invertebrate animals attach. Falling leaves and nesting birds add nutrients to the water below, thereby enhancing opportunities for the growth of other nearby marine life. Mangroves are also instrumental in the building of new shorelines and small islands within coral reef lagoons. Once established, these hardy pioneers grow and propagate rapidly, adding ever-greater amounts of sediments to the growing shore.

Despite these documented ecosystem benefits, mangrove forests are clearly not essential to the formation or maintenance of healthy coral reef ecosystems. Many extensive and well-developed coral reefs exist without them. A variety of algae is always present in coral reef ecosystems; in fact, a few types are essential to the survival of corals and the formation of coral reefs.

These diverse life forms were once classified as “plants”, but thanks to the huge advances in our understanding of evolutionary relationships made over the last four decades that is no longer the case. Today, the term “algae” is used to denote an informal grab-bag classification category that includes a number of distantly related groups of organisms, some of which are as different from one another and from true plants as are antelopes and mushrooms.

Large, multicellular forms of marine algae are commonly called “seaweeds”. These algal forms are widely distributed within coral reef ecosystems, where they occur as one of three main types based on color: green, red, and brown.

Each of these three types of seaweed contains photosynthetic pigments specialized to best utilize sunlight at different depths.

Green algae (Chlorophyta) are most common in shallow reef areas. These seaweeds are often found on rocky reef surfaces as well as on unconsolidated (sand) substrates.

Among the more abundant types of green algae common in coral reef systems are members of the genera Ulva (aka “sea lettuce”, photo right) and Caulerpa (sea grapes).

Another notable group of green algae found on coral reefs are species within the genus Halimeda. These have the unusual ability to incorporate calcium carbonate into their tissues and thereby add to sediment formation in the reef ecosystem. Red algae (Rhodophyta) are comparatively close relatives of the green algae. These forms may be found from the shallowest reef flats to depths exceeding 150 ft. on the fore reef – depths at which their special photosynthetic pigments can still extract the remaining blue part of the incoming sunlight.

While there are several types of red algae to be found, the most common by far are the so-called crustose coralline algae or “CCA” (photo left). Like the corals themselves, these organisms manufacture calcium carbonate and are a major player in the process of coral reef formation.

Other, fleshy forms of red algae are common to deeper waters of the reef ecosystem, where their specialized pigments allow them to capture the little sunlight available. Brown “algae” (Phaeophyta) are now known to be as different from the red and green algae as they are from animals. Members of this group are not uncommon on coral reefs, but not so abundant or varied as their distant kin (red or green algae).

Most of the biomass of coral reef algae are microscopic forms (microalgae).

The best known and most important of these tiny autotrophs are the zooxanthellae – a dinoflagellate symbiont that resides within the tissues of reef building coral polyps.

In return, the zooxanthellae gain the benefits of refuge from hungry predators as well as a ready source of otherwise scarce nutrients produced by the coral’s metabolism. Benthic diatoms can be also very abundant in coral reef ecosystems, covering the surfaces of seagrass blades, seaweeds, mangrove roots, and even open sand between reefs.

Inconspicuous as these tiny algae forms may be, their high productivity and sheer biomass ensure that they provide much of the primary production that occurs within coral reef ecosystems. The taxonomically diverse array of photosynthetic life forms introduced above are responsible for coral reef “primary production” (the creation of “new” biomass from simple inorganic pre-cursors).

Thus, these life forms play a key role in the ecology of coral reef ecosystems by supplying energy for the entire coral reef community, as well as defining the structure of several important ecosystem habitat-types.